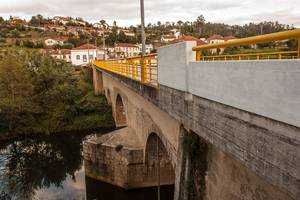 Modern Portugal, south of the Douro river, and part of western Spain, were once named the Roman province Lusitania, after its Indo-European native peoples, the Lusitani.  The ancient Roman stone roads pre-date many of our modern routes.  In fact, you can see the one that predates the Estrada de Beira (N17) in our basement.  Travelling on the trade route from Coimbra to Spain, the bridge located at Mucela was the only opportunity to cross the Rio Alva, which passes through steep mountains, and floods the valley at Mucela once a year in the rainy season.

The first recorded stone bridge over the Rio Alva was constructed in 1295 during the reign of King Denis I.  The royal Almeida road, that linked the Kingdom to Spain, passed over the Ponte da Mucela. Known conservation works date back to the 16th century, at the time of Cardinal Henrique.  In 1811, the central arch of the bridge was blown up by French Napoleonic troops to prevent their retreat from the area during the Peninsular War, where they were nonetheless eventually defeated by the Anglo-Portuguese army.  Now the Estrada de Beira (N17), the road was widened to accommodate more traffic in 1994, and eventually bypassed by a new highway to Spain in 2000.  What remains today is the Ponte da Mucela.

The Roman stone road is well preserved and visible in the basement of the stone farmhouse next to the bridge.  This may house a future 'Museu de Ponte Da Mucela', a small local museum housing annual educational exhibitions curated by artists researching the area, with no permanent collection.

With the fall of the Roman Empire, much of Portugal lived under Islamic rule for over 500 years from the early 8th century, when North African invaders (Moors) overturned the Germanic kingdoms ruling the Iberian Peninsula.  Their presence in this landscape remains (at least in one interpretaion of legend) in the name of Moura Morta, the name of our neighbouring village.

The Lavegadas heraldic coat of arms, drawn up in the 19th Century, is made up of a green shield, a bridge of four arches of silver drawn in black, with silver and blue river waves flowing below. Above the bridge is a silver dolmen between two identical golden lily branches.  The top is crowned by three silver towers and ramparts, below, a white ribbon banner with the legend in black, “Lavegadas”.
Symbolic Legend
The Catholic ecclesiastical mythology deeply influences all Portuguese parishes, which were only conferred legal status in the nineteenth century.
The green plains and golden Saint Joseph’s lilies represent the Catholic saint, carpenter and biblical foster father to Jesus Christ.  Father’s Day in Portugal falls on the 19th of March, venerated as Saint Joseph’s day in Western Catholic calendars since the 10th century.
The Rio Alva (White River), its source the ice water of the Serra da Estrela (Mountains close to Starlight), was a historically vital force driving the mills, water wheels, linen and fishing industries.
The megalithic dolmen at the top of São Pedro Dias (legally classified as Property of Public Interest by Decree no. 29/90 of 17 July), was first archaeologically investigated in 1959 by Dr. João Castro Nunes.  The burial mound was excavated in 1983.  Very little is still visible of this stone age passage mound grave.  The remains can be visited 5 - 10 km east of Poiares on the N17 (coordinates 40.22˚ N, 8.26˚ W).

The Gothic architecture of the Ponte da Mucela (Mucela Bridge), built in the thirteenth century during the reign of King Denis I, is one of the most important constructions of its kind from this era in the region. It was built to ensure safe passage of the river Alva throughout the seasons.  The royal Almeida road, that linked the Kingdom to Spain, passed over the Ponte da Mucela.  Known conservation works date back to the 16th century, at the time of Cardinal Henrique.
During the Peninsular War, in the third French invasion of March 1811, one of the arches of the bridge was dismantled to prevent the retreat of French troops from the area, requiring the Anglo-Portuguese army and local inhabitants to fight invaders pillaging their villages.  The retreating French troops sacked homes, barns and churches, attempting to steal the wealth of the country.  More recently, it underwent renovation due to the national highway (N17) that passes over it.

Select which cookies to opt-in to via the checkboxes below; our website uses cookies to examine site traffic and user activity while on our site, for marketing, and to provide social media functionality. More details...